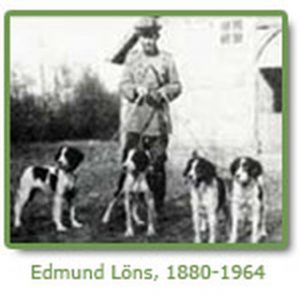 The Small (Kleine) Munsterlander was known in early days by a variety of names. Hermann Löns called them “heathland quail dog” or Heidewachtel. Some named them “The little Spy” or Spiönken after the characteristic fashion in which their small hunting dogs worked in the field. Many clergy and teachers owned the dog so they were soon nicknamed ‘Little Master’s Dog’ or Magisterhündlein. But when a club was formed in 1912 the Small Munsterlander name was chosen. The Small Munsterlander is a long haired versatile dog that maintains the strong hunting qualities that were found in them in the early 1900’s.

The little dog takes up the staunchest, intense point when encountering all game holding tight, keeping the point until the hunter arrives  – then the game is flushed, the dead game is fetched, the crippled downers tracked, and securely retrieved with the utmost skill. – Rudolf Löns

The Small Munsterlander, also known as the Kleine Munsterlander, is an elegant strong dog with much self-confidence. It is a versatile hunting dog that combines intelligence, desire, and devotion enabling him to quickly adapt to the varied terrain or game and its masters hunting style. It is also a very clean dog that is most happy living in the home of its master. Typical characteristics are diligent ingenuity during fieldwork, solid pointing instinct, meticulous tracking ability, great endurance-even under difficult conditions. It has a great love for retrieving and enthusiasm for water work, voice on the trail and easy handling. Small Munsterlanders can be used for agility trials, obedience, or confirmation. The SM is a cooperative dog that seeks to please. But they can also be intense and stubborn. When training it is important to be consistent, not overly repetitious, and teach the dog what is expected of him. The stubbornness is a trait that can help make the dog a very persistent hunter. The Small Munsterlander is intelligent and needs regular mental stimulation and adequate exercise. If left alone in a kennel or not trained a SM can be bored and become destructive. The Small Munsterlander is many times slow to mature and usually reaches its full potential at about 2.5 years of age.

Origins of the Small (Kleine) Munsterlander

In the 17th century, German, Italian and Dutch artists included dogs that looked like our Small Munsterlanders in their artwork. However, the true origin of the dogs of that time is not exactly proved.

For several hundred years these small, handsome dogs had been the true companions of the hunters on the vast moors and bogs in the northwestern part of Germany, mainly in Westphalia. In 1840 when land reforms changed the viability of hunting as a trade, so Small Munsterlanders gradually lost their popularity, and it appeared that their extinction was inevitable. Only on remote farms on the moors did the farmers keep the line pure by keeping just one bitch for breeding and culling the rest of the females in the litters.

Development of the Small Munsterlander

The development of the Small Munsterlander occurred in the middle of the 19th century. After the change of the German hunting law, with the increasing number of hunters and hunting enthusiasts and the systematic cultivation of the game stock the breeding of new German Pointing Dogs began. There are reports saying that around 1870 long coated “Wachtelhunds“(German Spaniels) were well known in the Munsterland region. These dogs were firm or staunch in pointing; they had enormous scenting abilities and were also able to retrieve.

In 1906 the well known heath poet Hermann Löns placed a public appeal into the magazine “Unser Wachtelhund” (Our Hunting Dog) to give him a report on the still existing specimens of the red Hanovarian Heath Hound or Hannover Bracke. However, instead of that he and his brothers, Edmund and Rudolf Löns, discovered a pointing Wachtelhund on the farms, that they called “Heidewachtel “(heath quail dog) on the farms of Lower Saxony. His brothers Edmund and Rudolf Loens found instead a dog, which they called “heath quail” or Heidewachtel, on the farms of Lower Saxony. They proceeded together to look for a basis for a breed. 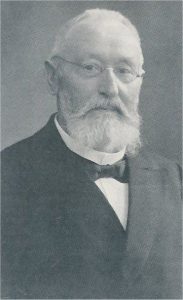 Edmund Lons, in cooperation with Dr. Jungklaus, worked tirelessly to improve the breed and they came in contact with schoolteacher Clemens Heitmann from Steinfurt in 1907 and found in his dogs the basis for a breeding program. For 40 years Heitman had been breeding the same line, and was able to trace it as a purebreed for nice looking dog, short in the back, long legged with a great gait, plenty of smooth hair and with beautiful feathers on the tail. The head was long, and the nose often showed a slight downward curve. The mouth was strong, moderately full, but never short. The ears were small, about middle-length, with good coat and they give the head a refined expression; they were set high and at the bottom they become too small, good closure and they gave the dog a pretty and trustworthy expression. The height of the dogs was from 38 cm to 50 cm and none of them showed a distinct forehead stop. They had excellent hunting qualities, were dapper, easily handled, very social, and they bayed hen tracking. 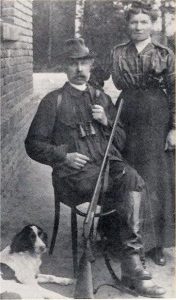 In 1911 Löns discovered another breed family, the so-called “Dorstener Schlag”, which was bred near Velen, Reeken and Coesfeld. The Dorsten line was an excellent looking dog with a great chest, front legs and shoulders. The back was a little longer and the height was slightly taller than the Heitmann dogs often above 50 cm. The mouth was straight with tight lips and appeared a little more pointed. They had beautiful brown eyes, well-formed ears, a good coat, a beautiful tail with feathers, was an excellent expressive bird dog and they had in opposition to the Heitmann dogs a distinct forehead stop.

So, Heitmann’s stock was soon augmented by gamekeeper Wolberg’s in Dorsten-Hervest. This line could be traced back to the 1860s without a break. One of the ancestors was named “Caro”. In 1907, Wolberg had acquired three dogs, one male and two bitches, from watchmaker Heinrich Brüning in Tungloh. He kept two of these dogs, ‘Rino Hervest 36’ og ‘Mirzel I Hervest 37’, which were siblings out of a mating between another pair of siblings, ‘Caro’ og Polly’.