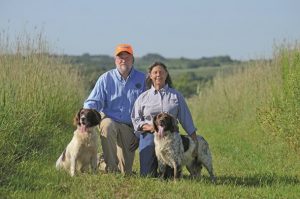 Situated on 280 acres dedicated to the Conservation Reserve Program, the farm has been home to Kris and her husband, Jeff, since 2002. Here, 39 litters spanning four generations of Hunting Hills Small Munsterlanders have been bred and trained to be well-balanced companions in the field and at home.

The farm includes three kennels with 14 runs altogether, a 15-acre lake and two ponds, and several coveys of wild upland game such as quail and pheasant. “It is the perfect place to start puppies,” Kris says.

Twenty two NAVHDA and Small Munsterlander Club of North America (SMCNA) NA Breeder Awards plus 13 SMCNA NA Sire Awards have been bestowed on Hunting Hills for having at least four pups from a litter pass the NA test with with a minimum point total of 360 points (90 point average per dog). Bids to the NAVHDA Invitational, the highest level of testing, have resulted in three versatile champions. Still, Kris is in disbelief over her success.

“I never thought I’d train and handle a versatile champion once, let alone three times,” she says, gleaming. “For me, training and testing is about the journey you take with that dog. If you get to the Invitational level, you’re already successful whether or not your dog passes.”

Before Hunting Hills was established in 1995, neither Kris nor Jeff had experience with purebred dogs. Avid turkey and deer hunters, they began to search for a sporting dog. A 1994 article in the Omaha World-Herald by outdoor writer Larry Porter about some “beautiful, even-tempered German hunting dogs” sparked the couple’s interest. Breeder Ray DeJong of Brookings, South Dakota, was quoted to say the breed is “one of the best-kept secrets” among upland game hunters.

“At that time, there were only five breeders and fewer than 300 Small Munsterlanders in the United States,” Kris recalls. “I was so drawn to these dogs I called every breeder mentioned in the article to get on their lists.”

The wait ended a year later when Kris bought “Darby” (Darby vom Krieger) from Barbara Krieger of Krieger’s Ridge Kennels in West Bend, Wisconsin. Krieger encouraged Kris to join NAVHDA to learn how to train and handle her new puppy. However, the nearest NAVHDA chapter was in Freeman, South Dakota. Kris frequently made the four-hour drive each way to attend training days, completing assignments from her instructors with Darby throughout the work week as time allowed.

Dog training pros Al Harmeyer and Tracy Harmeyer of Krystal Creek Kennels in Cedar Grove, Wisconsin, trained and handled Darby to a Utility Prize I . The Harmeyers’ hands-on mentoring helped Kris establish herself as a trainer. “After Darby passed the UT, they trained me not to untrain her,” she says.

During a serendipitous stay at a hole-in-the-wall motel one weekend in Freeman, Kris met her close friends Bev and Randy Turner, who also were from the Nebraska area. Tired of making the long drive north to train, the Turners and Hills started the NAVHDA Heartland chapter in Omaha in 1997. Bev always said, “The biggest problem with the Small Munsterlander breed is that you can’t own just one!” How true that statement is today.

Now retired, Kris is devoted to raising puppies, training dogs, testing dogs and hunting. Field exercise is completed in the mornings, followed by water work in the afternoons. Finished dogs assist with pointing and backing for NAVHDA Invitational training.

“Training is like putting a puzzle together,” she says. “It’s part physical, part cerebral.” 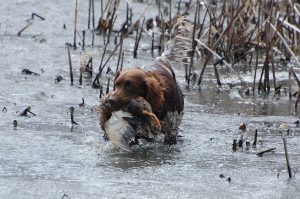 Upholding the German tradition of registering litters alphabetically, Kris bred her “A” litter out of Darby in 1998. She knew she needed an outcross to improve her dogs’ conformation and natural ability and to further develop the Hunting Hills bloodline. Kris studied German records, looking for stud dogs with high conformation and hunting scores. She sent inquiries to several German breeders, but only one responded. During a brief correspondence in 2003 with Manfred Morber, a Small Munsterlander breeder in Affalterbach, Germany, Kris agreed to buy a roan pup provided she could first meet the sire and dam. Morber granted her request, so Kris paid $350 to book a round-trip flight to Munich to pick up “Cody” (VC Cody vom Apfelbaumbach). 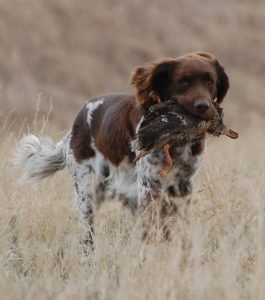 “Rather than sightseeing, I got to know Manfred and how he trained and hunted with his dogs,” Kris says. “As we filled out the paperwork, he kindly told me, ‘I hope Cody will be your dream dog.”

Was he ever. The first versatile champion Kris owned and trained, Cody received a record eight SMCNA Sire Awards, worthy of induction into the SMCNA Hall of Fame in 2012. He also became the first Small Munsterlander in the United States to run in the JGHV VJP and VGP tests, which examine natural ability and utility performance, respectively, through JGHV (Jagdgebrauchshundverband), the umbrella organization of German versatile hunting dog clubs.

“Cody always did exactly what I asked of him. He knew how to turn it on and off,” says Kris. “He passed on to his progeny his staunch point and cooperative nature.” 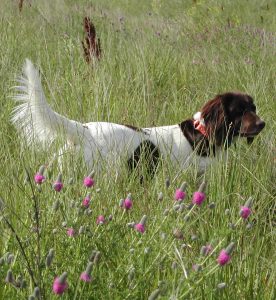 In 2005, Kris imported “Jaika” (VC Looses Jaika), a brown-and-white female, from a well respected Danish breeder Hans Loose. “Even as a puppy, she was calm and even-tempered. A bold, quick learner, Jaika has a beautiful, setter-like point, keen nose and is a reliable retriever,” Kris says. Anticipating Cody and Jaika would complement each other nicely, Kris planned to breed them. “Cody was very masculine and laid-back, while Jaika was a petite little go-getter,” she says. 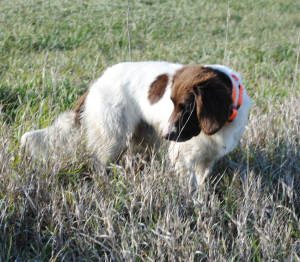 That first breeding in 2007 produced “Hemi” (VC Hunting Hills’ Hemlock). Taking after his sire and dam, Hemi became Kris’ third versatile champion in 2012. He has sired 27 Hunting Hills dogs, receiving a NAVHDA Breeder Award for the “J” litter in 2008 and a SMCNA Sire Award for the “Q” litter in 2011. A Hemi son, “Joker” (VC Hunting Hills’ Joker), also became a versatile champion under owners Pam and Mario Robinson of Robingun Kennels in Lincoln, Nebraska, as well as a SMCNA Hall of Fame member. Cody and Jaika produced two litters, boosting the Hunting Hills dogs’ NAVHDA test scores dramatically. Jaika, also a SMCNA Hall of Fame member, holds the record for producing 12 dogs that have completed Prize I work during their NAVHDA testing.

“I always strive to complement the dogs I’m breeding,” says Kris. “A steady temperament is paramount, followed by correct conformation, excellent hip health and keen natural ability. I want my dogs to be as successful at home as they are in the field.” 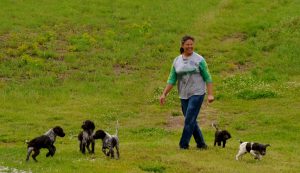 Training, which begins at 6 weeks of age, introduces the pups to birds. Seeing different kinds of birds and learning to respect them is crucial. Before picking up their tracking and pointing abilities, they start taking daily walks at 5 weeks. By the time they leave for their forever homes at 8 weeks, the puppies are socialized following the rule of seven. “Whatever you do with them, whether it be feeding, meeting new people or exposure to new environments, you should do each skill seven different ways,” Kris says. “This helps to give  owners a well-rounded, even-keeled dog.”

Kris prefers to sell puppies to NAVHDA members to ensure the breed is promoted through proper training and testing. She also encourages her puppy buyers to join NAVHDA. Over 200 Small Munsterlanders have been born at Hunting Hills, with more than half being NAVHDA NA tested. Almost all passed.

“I like to NA test at least one dog from every litter,” Kris says. “If I see a dog I wouldn’t want to own, then I know not to repeat the breeding.”

Kris says her dogs keep her young at heart. Years of nagging arthritis and a car accident threatened to sideline Kris from the sport she loves. In 2007, Kris and Jeff were driving home from Chicago where the couple was visiting Jeff’s mother. While passing through an intersection, another vehicle wrongfully turned in front of them, causing the Hills to slam into the car before spinning into a traffic post. The incident sent Kris to the emergency room with a ruptured small intestine. She spent two weeks recovering in the hospital. In the months following the accident, Jeff, a family physician at the University of Nebraska Medical Center, urged Kris to rebuild her strength by resuming morning walks with her Small Munsterlanders.

“Getting back into the routine with my dogs was the best therapy,” says Kris. “They taught me I can do more than I ever thought I could. It’s all about patience and perseverance.”

Today, Kris is as exuberant as ever. Her joy and passion for the breed and sport shines as she practices retrieving with 18-month-old “Flynn” (Hunting Hills’ Xpress Flynn) and 2-year-old “Ulysses” (Hunting Hills’ Ulysses). The pair most recently passed their UPT tests. Once the young dogs complete their NAVHDA Invitational work, they will return to Hunting Hills for breeding. “Flynn and Ulysses have a lot of energy and natural ability. It’s a matter of waiting for them to mature so everything comes together,” she says.

Kris’ current string also helps to fill the void left by Cody, who passed away this summer. Upon the 12-year-old’s death, Kris sent Morber a letter to thank him for the wonderful dog he sold her.

“Cody was my heart dog,” says Kris. “He was a true gentleman, my protector, best friend and always there for me. I loved him so much.”

Similarly, Kris often receives letters, phone calls and emails from her puppy buyers updating her on their Small Munsterlander. “I love when my owners call and excitedly tell me their dog did really well in the field on a particular day or passed their NA test,” she says. “When you see the success of your dogs play out for others, everything comes full circle. It’s very gratifying.”

Full circle, indeed. Almost 23 years after Darby ran in her first NAVHDA test, Kris nods to those who paved the way for her as a breeder, owner and trainer by doing the same for the next generation. She remains active in NAVHDA, serving as a judge and as her chapter’s summer test secretary. She and Jeff host tests at the farm, where new puppy owners are welcome to return for use of the rich training grounds or to tap into Kris’ wealth of expertise.

Reflecting on her career, her beloved Cody and the rest of the masterful Small Munsterlanders of Hunting Hills, Kris says, “I hope I can produce someone’s dog-of-a-lifetime. I want my puppy buyers to look back and say, ‘That Hunting Hills dog gave me such joy. We had so many good times together.’” 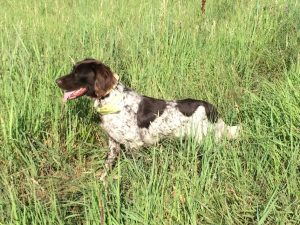 His exact origin unknown, the Small Munsterlander is believed to have been developed during the 19th century in the Münster region of northern Germany, where the breed was nicknamed “little spy” for his tenacity and intelligence in the field. This versatile hunting dog is prized for his elegant style, characterized by skillful retrieving, staunch pointing and meticulous tracking. Capable of enduring even the most difficult conditions on land and in water, the Small Munsterlander uses his wagging, horizontally carried tail to signal game. Confident and eager to please, the Small Munsterlander is an equally devoted hunting partner and calm family companion. His smooth, feathered coat can either be brown-and-white or roan (brown-and-white with brown ticking). A medium-sized breed, males are 21 inches at the withers and weigh 45 to 60 pounds; females are 20 inches at the withers and weigh 40 to 55 pounds.